Not content with being a river that has inspired artists and writers and other creative types across the ages, the Thames is also an amazing archaeological site – when the tide rolls back and allows its treasures to be revealed. In fact, at low tide it becomes London’s longest open-air archaeological site. As I am also a huge Thames-phile, doing a Thames archaeology walk has been on my to-do list for some time now, so last weekend I took the opportunity to go on the Thames Discovery Programme’s Rotherhithe Winter Walk.

Elliott Wragg led us on this ramble from Rotherhithe to Bermondsey – an area that was long associated with ships and ship building. And sure enough, we were immediately able to locate a number of nautical remnants, such as anchors, rudders, and ship timbers that have been re-used to form a slipway. Sadly, due to rapidly increasing erosion more and more of these items are being revealed – good for archaeology, not such a good portent for the environment.

Elliott also taught us how to ‘read’ the various areas along the river bed. When you look closely you realise that certain areas have a preponderance of say, glass, where there would have once been a glass foundry (or maybe just a pub!), or pieces of old leather and shoes where a shoe factory was based. You can also find a large number of bricks along the foreshore in this area that are actually the remains of bomb damage from the Second World War, when the dock areas were heavily hit. 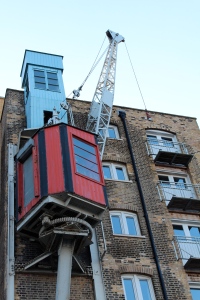 Thames Discovery also have a Putney Winter Walk coming up on Saturday 11th February, which will explore the Putney foreshore (free but donations welcome). If a spot of mudlarking (i.e. hunting for treasures along the river bed) takes your fancy, you may prefer the Thames Explorer Trust’s Millennium Bridge Walks (suitable for families and £8 for adults, £5 children), where the hunt is on for pipes and pottery (dates are currently scheduled for March and April). Alternatively, London Walks run Thames Beachcombing sessions (also guided by an archaeologist), on weekends when the tide permits (dates are currently scheduled up until the end of April, places are £8).

The Thames foreshore was almost deserted apart from our group on this fine (but admittedly rather crisp!) winter morning. In the nineteenth century the Thames was London’s premiere playground, with people piling onto boats for cruises and parties. I think it’s time we re-claimed the Thames, so come summer let the river become your own walking trail, beach  – and archaeological site. In the meantime, there are always these walks to consider: