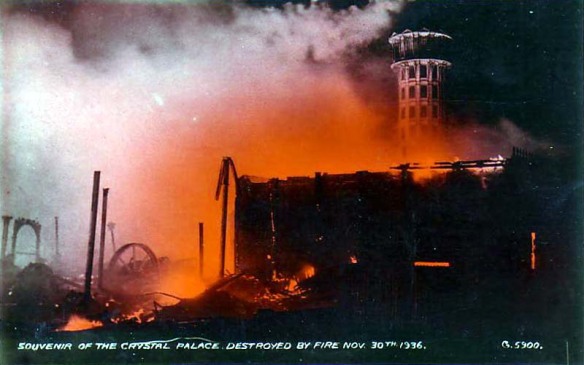 So to the second instalment of the Londonphile’s vintage postcard series. This dramatic postcard depicts the events of the night of 30th November 1936 when the Crystal Palace was destroyed by fire. Designed by Joseph Paxton, and made from plate glass and cast iron, this massive greenhouse-esque structure was the former home of the the 1851 Great Exhibition, held in Hyde Park.

At the completion of the Exhibition there was a quite heated debate about what to do with the Palace. Eventually it was decided that it would be relocated and rebuilt on a much larger scale, and to a significantly different design, in Sydenham Hill – a plan that ultimately cost £1,300,000 (that’s £96.5 million in today’s terms). This new version opened in 1854 and was host to numerous concerts, fireworks displays, cat shows and the like.

Sadly, despite the efforts of 89 fire engines and 381 firefighters the Palace was lost to the nation in a matter of hours on that fateful night in 1936. Thousands of people, including Winston Churchill, flocked to Sydenham to watch the massive conflagration, while others gathered on higher ground, such as Hampstead Heath, for a view. The glow from the flames was said to be visible from as far away as Brighton and across eight counties.

The two giant water towers – designed by Isambard Kingdom Brunel to cater for the massive amount of water that the Palace required for its extensive water features – were the only buildings left standing (you can see one at the back of the picture). Brunel had been called in for a re-design after the original towers collapsed under the weight of the water. However, even these were later demolished during the Second World War as it was thought that German aircraft might use them as landmarks. The final sting in the tail was that the entire structure was horrifically under-insured for the sum of just £110,000.

This post serves as a preview of sorts, as I will visit the old Crystal Palace site later in the year and write a more lengthy piece on this fascinating building, its story and what remains today. 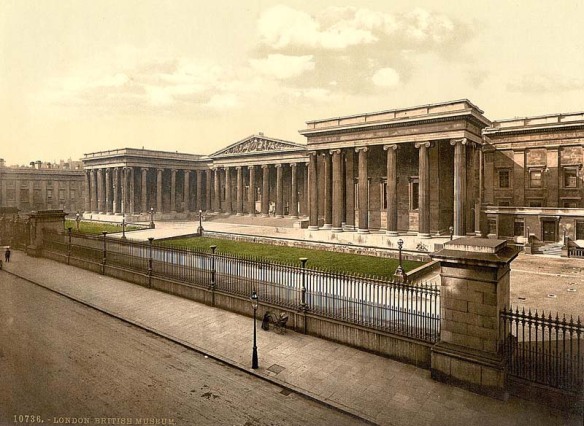 I love Museums and I love old postcards, so you can see how this post came about. Just a short post so I can share with you the British Museum in all its neo-classical finery (not sure which year this one hails from I’m afraid – please feel free to hazard a guess!). Hope you like it – this will be the first of a series featuring old postcards and images from London.