St Bride’s Church – arguably best known for its wedding cake spire – is a place brimming with history – and even a rather gruesome surprise or two. There have been eight places of worship (the earliest dating from Roman times) in total on St Bride’s Fleet Street site – a location that has also made it the journalists’ church of choice; today it features an altar to fallen reporters. But 1,000 years of its history was hidden away underground until the Blitz unearthed St Bride’s secrets.

St Bride’s was amongst a number of City churches that were destroyed in the 1666 Great Fire and rebuilt by Wren only to be destroyed again during the Second World War. But these bombs did indeed have a silver lining of sorts, as they exposed the crypts that had long lain beneath the church. Sealed up after parliament decreed there were to be no more burials in the City, this underground area was revealed to contain seven crypts, a medieval chapel, two charnel houses, and loads of bodies – many dating from the Great Plague of 1665 and the 1854 cholera epidemic. 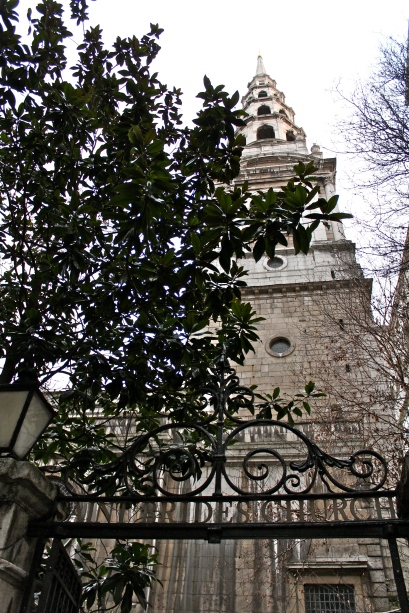 You can visit St Bride’s and most of its crypts any day of the week, but to get the full picture of its history – and full access to its underground areas – take one of their regular guided tours. These 1.5 hour tours are the only way to access St Bride’s rather ghoulish – and absolutely fascinating – charnel house and ossuary. A narrow passage past a rather prosaic kitchen and storage area leads you to these unusual last resting places. 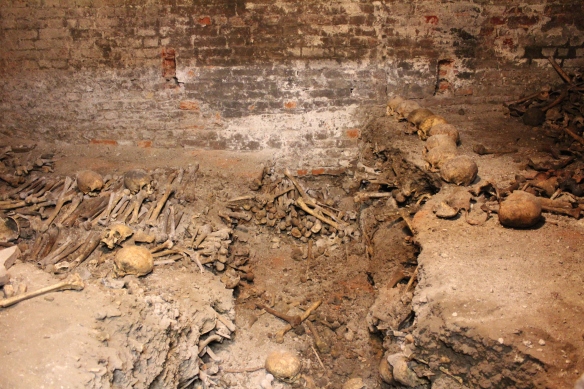 The medieval charnel house (pictured above) features literally piles of bones buried on top of one another in an unusual chequerboard pattern – and I’m told it goes much deeper than what is currently visible. The ossuary is decidedly more organised and contains the remains of 227 individuals all neatly packed away in numbered cardboard boxes. The bones were identified by their coffin plates – some of which can also be seen in the ossuary. Names and other data, such as cause of death, have been systematically recorded, along with drawings of each bone.