Last weekend I visited some floating gardens on the Thames, as part of the annual Open Garden Squares Weekend. Garden Barge Square – also known as the Floating Barge Gardens – is built across the top of a number of boats on the Downings Roads Moorings, which boasts a pretty spectacular backdrop in the form of Tower Bridge. 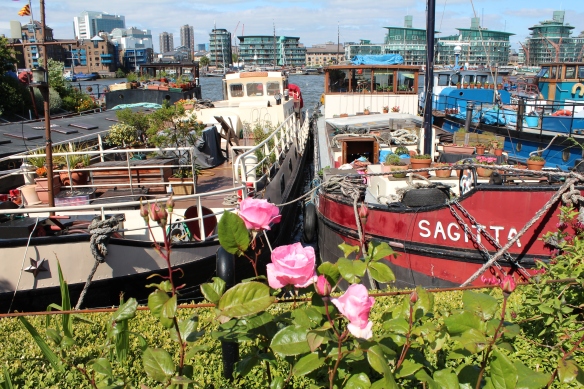 There have been moorings in this area – close to the old Jacob’s Island site – for around 200 years or so, though the gardens themselves are a relatively new innovation having first appeared in the late 1990s. I was surprised to learn that the moorings’ continued existence is only due to a vigorous fight against moves by Southwark Council to shut it down in 2003 and 2004. But clearly that’s another story…

I regularly catch boats past these gardens but had no idea just how extensive they were until I ventured onboard. There are trees up here! Much of the gardens are built across the top of the barges in metal trenches on either side of central pathways. The various boats are then connected via a series of walkways and bridges. It’s very easy to forget that you are walking right across the top of someone’s boat – which is often their home as well, with over 70 people residing or having a studio on the 30+ boats moored here. 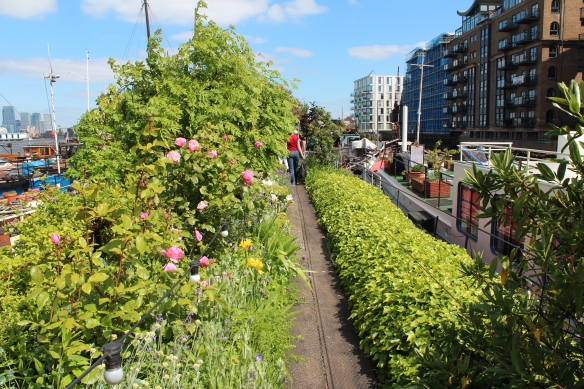 The waters along the Thames here are very rocky – much more so than on canals or marinas. You will definitely find yourself swaying with the motion for some time after you get back to dry land. The good news is that once you get over the initial narrow walkway that leads to the barges you feel much more secure in the garden areas themselves.

And it’s worth it to visit this unique environment, though you’ll have to wait for the next Open Garden Squares event, scheduled for June 14th and 15th 2014. In the meantime, a good view of the barges can be gained from the Thames Path around Bermondsey Wall West. 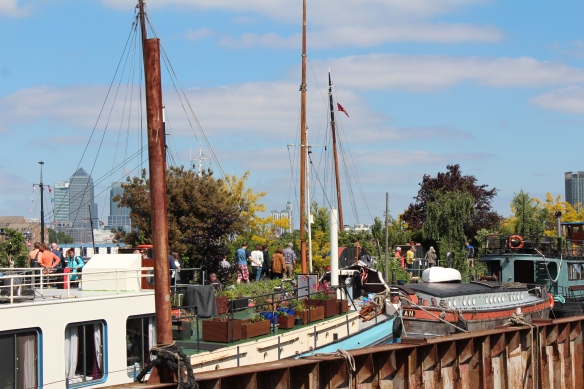