Marc Hagan-Guirey’s Horrorgami certainly seems to be the flavour of the moment with London’s art lovers – if the numbers visiting last Sunday were anything to go by. Hagan-Guirey’s own specialist blend of the Japanese art of kirigami (think origami with scissors) with the horror films that were so influential on him as a child – resulting in ‘horrorgami’ – has also generated a unique exhibition featuring intricate paper models of iconic buildings from the genre. 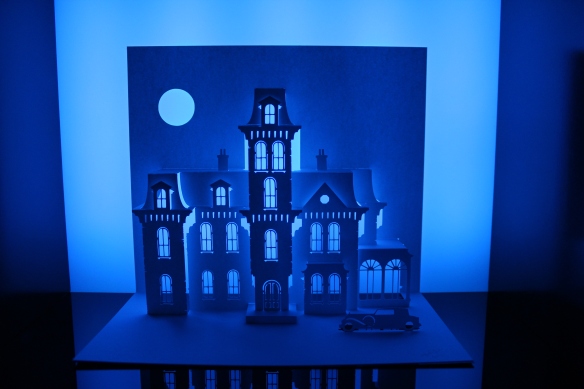 London-based Hagan-Guirey’s first foray into horrorgami occurred when he built a model of Frank Lloyd Wright’s Ennis House as a thank-you gift for a friend who organised a visit to the innovative, concrete Californian house. Ennis House was also the setting for House on Haunted Hill – and when the next model he produced was the Addams Family Mansion, Hagan-Guirey realised he had something of a theme going.

Each of the 13 models in the exhibition are created from a single sheet of white paper. The gallery has presented these in two upstairs rooms, curtained off to create darkness. The works are placed in light boxes, with different colours backlighting the models to great effect. The devil is very much in the detail here – both the intricate nature of the works and the subtle features like the pram placed outside the Dakota Building in the Rosemary’s Baby model, and the figure peering eerily out from a window in the Psycho house. The reflections produced along the base of many of the light boxes are also particularly striking.

Horrorgami is free and on now until Wednesday 14th November at Gallery One and a Half, Ardleigh Street, N1 4HS. Monday-Friday 10-5, Sat-Sun 11-4. The closest station is Dalston Junction. 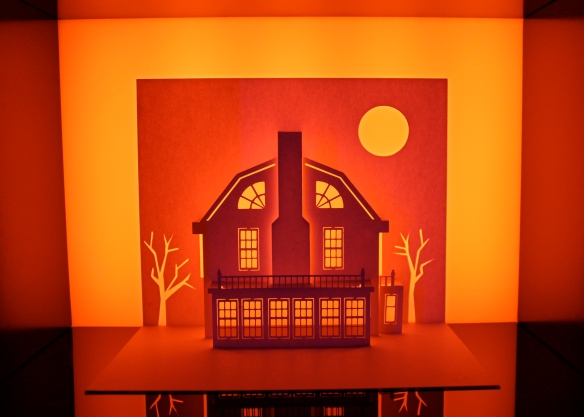 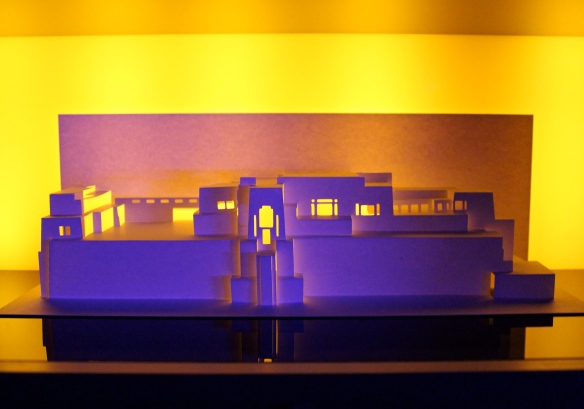 Paul Benney’s atmospheric series of paintings – entitled Night Paintings – are the perfect fit for their current home in Somerset House’s Deadhouse. Londonphiles will also be interested to know that the subterranean Deadhouse and the surrounding lightwells – normally only accessible on guided tours or for private events – are currently open to the public for this free exhibition, the first of its kind in these spaces. 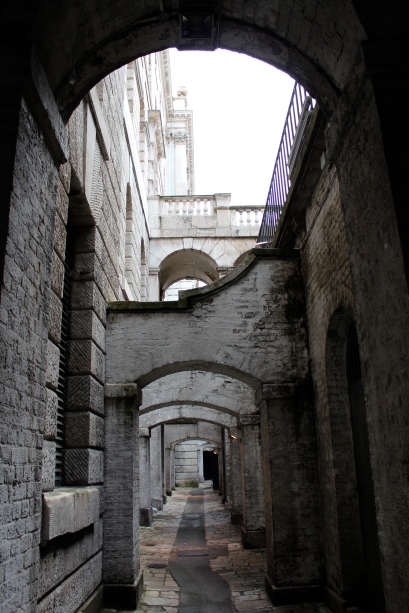 The Deadhouse runs underneath Somerset House’s Edmond J. Safra Fountain Court, linking the east and west wings and has long functioned as a passageway for just this purpose. The lightwells that surround the courtyards are home to a number of small alcoves – often used for storage – and some currently have individual works by Benney displayed very effectively within them. The Deadhouse is also home to a number of seventeenth century gravestones – but no bodies. To explain this anomaly we need to go back in time somewhat, into the depths of Somerset House’s long history.

In short, a former incarnation of Somerset House used to be the Buckingham Palace of its day for the three queens who lived there. Charles I rather contentiously built a Roman Catholic chapel for his French queen Henrietta Maria here. This site also included a burial ground. When this version of Somerset House was demolished and replaced by the current building, which was built between 1776 and 1802, some of these gravestones were kept and relocated into the walls of what is now known as the Deadhouse. These walls actually serve to support the quadrangle due to the sloping nature of the site.

But back to the art… London-based Benney has a studio at Somerset House – which also explains why his works suit the space so well. Night Paintings includes some works featuring an interesting use of resin and a number of water-based subjects. It was raining on my first visit to this exhibition and the watery works seemed well suited to the mysterious, damp, enclosed environment, which was literally dripping in places. The shadowy, paved alleyways of the lightwells, with their individual works placed inside the alcoves, lead the viewer neatly round to the Deadhouse, where the larger body of works are found.

So both the rare opening of the Deadhouse and Paul Benney’s evocative works make for two very good reasons to visit Somerset House right now. You have until Sunday December 9th, when the exhibition closes.

Free guided tours of Somerset House – which visit the Deadhouse and lightwells – run all year round on Thursday and Saturdays afternoons. 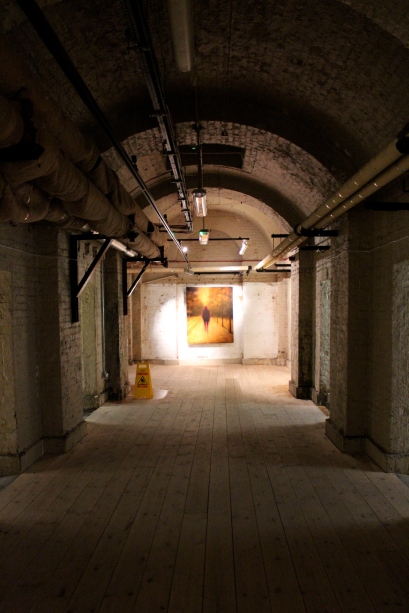