“All theatres are, in a sense, temporary…The ones I particularly like are less impenetrable monuments, cathedrals of culture, than petri-dishes of ideas and emotions, swirling, expanding universes. They’re built to house performances that will, by their very nature, happen once and then change. No theatrical event is repeatable; that’s what makes live performance so exciting”
– Ben Power, Associate Director, National Theatre

Anyone passing South Bank recently could hardly fail to notice its latest addition – a bright red, wooden fortress-like building. This is in fact the National Theatre’s latest innovation – a temporary theatre space known as The Shed. Designed by architecture firm Haworth Tompkins, this structure took just 18 weeks to erect and is built to last less than a year.

Its vibrant red colour creates a strong contrast with the grey, brutalist concrete structure of the main National Theatre venue. With its four chimney stacks reaching into the skies along the river, The Shed immediately reminded me of Battersea Power Station, just up river from here. Its towers are actually an energy-saving mechanism, as the stacks avoid the need for mechanical ventilation by drawing air in naturally from under the seats.

I’ve been waiting weeks for the unseasonal snow and rain to pass so that I could photograph The Shed in the bright sunlight and blue sky that would set it off to great effect. After keeping one eye on the forecast over the entire Easter weekend, I was finally rewarded with some decent weather around 3pm on the Monday. The clouds present enhanced the power station effect, appearing at times like plumes of smoke from the chimneys. When viewed from Waterloo Bridge, the structure’s almost cuboid shape really comes to the fore. Later, the fortress imagery reasserted itself when editing the photos, as they reminded me of ones of Stoke Newington Pumping Station, the design of which was based on a castle. 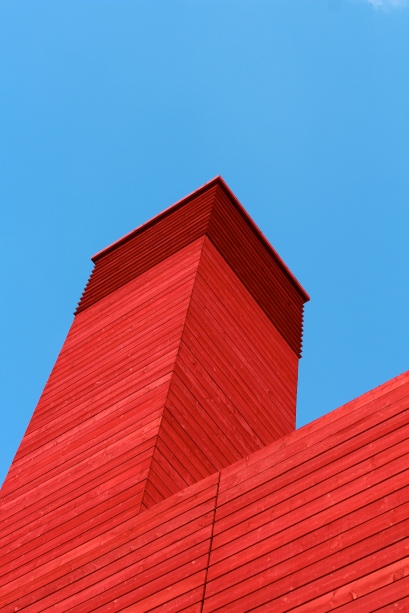 The Shed will play host to a number of experimental theatre productions, priced at only £12 or £20 per ticket. Performances start on April 9th. 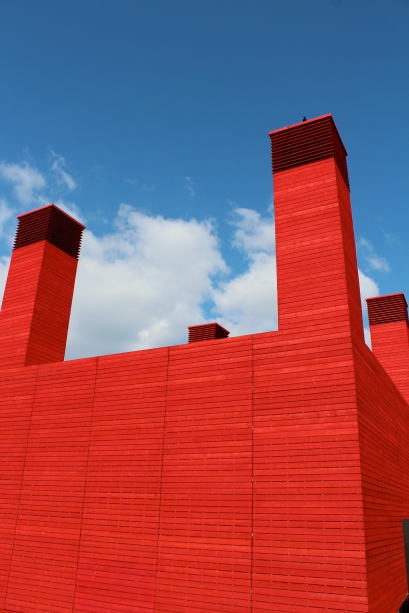