Next time you drop past the Royal Academy for an exhibition (or perhaps while you are waiting in vain for Hockney tickets) spare more than a cursory glance at the two red telephone boxes in the entranceway, for these are the original red telephone boxes. The wooden box on the western side (shown above and right) is actually Sir Giles Gilbert Scott’s 1924 winning entry in a competition held by the General Post Office to design a new phone box. The one on the eastern side (seen below) is one of the first cast iron boxes to be created from this design. This style became known as K2 – Kiosk No. 2 (K1 was concrete and originally painted cream, although they have often been re-painted red since).

Apparently Scott – an architect perhaps best known as the designer of the equally iconic Battersea Power Station – originally envisioned that his design would be silver and made from steel, but the bright red colour was thought to be most visible, particularly in emergencies. And the rest is history…Scott was also asked to design a cheaper version for the rest of the country, which became the K3. Like many of the old red telephone kiosks, the ones outside the Royal Academy are now listed buildings – and both are still fully operational today. So yes, you can still drop by and put in a call from the first red telephone box… 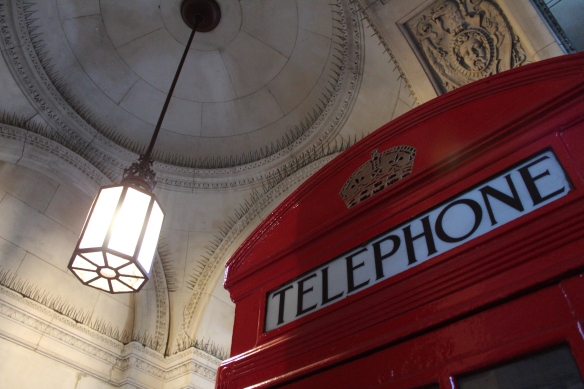