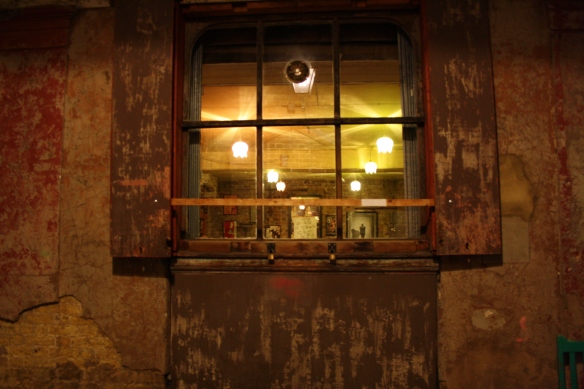 No one does faded grandeur quite like Wilton’s – not just England’s, but the world’s oldest surviving music hall. Its peeling columns, ‘barley sugar’ cast iron pillars and old Indian frieze create an unforgettable atmosphere. Like all special places it’s best seen for yourself. But although the effect is somehow glorious, this isn’t just shabby chic decor – much of the decay is real. Wilton’s has been seeking support and funding for years for much-needed renovations, and has finally just had some success on this front – so this is a story with a happy ending.

The story starts in 1858, when John Wilton had the hall constructed along the back gardens of the terraced houses that form the front area of Wilton’s. A tavern was previously found on the site – and said to be very popular with sailors from around the globe. It was often referred to as the Mahogany Bar due to its fixtures. The bar was retained as the main entrance to the original music hall, and today the name is used for the gloriously cosy drinking establishment you can still patronise at Wilton’s. 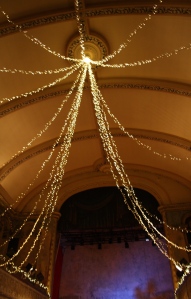 Wilton’s great initial success as a music hall was not deterred by a major fire in 1877, and it was rebuilt the following year. Music hall luminaries such as Arthur Lloyd and Champagne Charlie trod the boards here, while its patrons could chose between the ladies of the night waiting at the top of the stairs and the more respectable seats downstairs, suitable for wives and girlfriends. Supper tables were also available, as was a promenade area for standing patrons. Entertainment was of the variety show type, including dancers, magicians, burlesque, comic and a wide range of musical talent.

But the popularity of the music hall genre eventually waned and new fire regulations in 1880s were the final death knell for the hall. Ironically, it was the Methodists who ended up saving Wilton’s. They turned the music hall into a mission hall – and because its almost chapel-like interior suited them perfectly, they simply left it like it was and preached amongst it…and the rest is history. The building also provided shelter for locals during the Blitz and was a rag sorting depot for a time. Today it numbers among its patrons the rather unusual combination of Prince Charles and David Suchet (a.k.a. Poirot).

A wide yet discerning range of entertainment is now on offer, including music, theatre, cinema and comedy. And where else but Wilton’s would you attend a magic show – as the Londonphile did in December – only to discover that Marc Almond was popping by to sing several Christmas songs? It is also a popular venue for filming, and recently played host to the latest instalment in the Sherlock Holmes franchise – although keen eyes will notice that the filmmakers ‘added’ an extra floor to the hall. But Wilton’s is worth a visit in its own right. And you can always just pop by the Mahogany Bar for a drink (it’s open most weeknights – check the website) – the ornate bar itself is a left-over donated after the Sherlock filming. And on Monday nights at 6pm you can learn more about Wilton’s history and architecture on a guided tour for just £6, which I highly recommend.

And so to that happy ending. After years of courting funding and support, Wilton’s recently received £700,000 from the SITA Trust for restorations. This funding means phase 1 of the Capital Project for crucial work on the auditorium can be completed and, importantly, stands Wilton’s in better stead when applying for further money for phases 2 and 3. Another £2.2 million is still required, so pop by, have a drink for charity and check out the glorious surrounds of this magical music hall. After all, Poirot can’t be wrong!