At similar points across the Thames in Wapping and Rotherhithe – like sentinels along the river – stand two rather mysterious identical circular red-brick structures. Surely many a passerby over the years has wondered exactly what these buildings are. They are in fact twin ventilation shafts – more romantically known as cupolas and sometimes referred to as the Rotherhithe Rotunda or Rotherhithe Tunnel Shafts – for the Rotherhithe Tunnel, which allows vehicles to travel under the river at this point between the north and south banks.

The cupolas were not built to deal with the noxious fumes produced by cars – as one could be forgiven for assuming – but with those produced by the horses that at the time of the tunnel’s construction were still very much the main form of transport. Likewise, the pathways along the edge of the tunnel itself were not designed for pedestrians but for the men who used to walk the length of the tunnel shovelling horse manure off the road – surely a contender for inclusion in The Worst Jobs in History TV series. 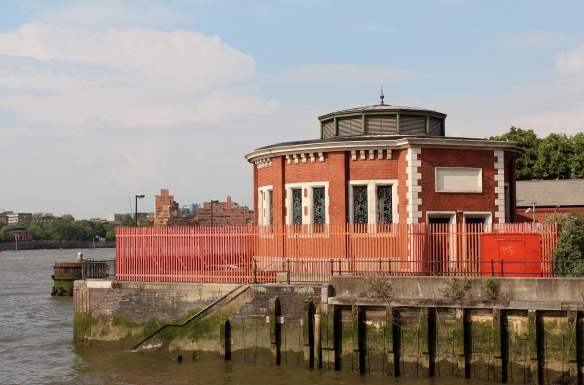 The Rotherhithe cupola in the foreground – you can just see its Wapping twin on the far left on the north bank.

The Rotherhithe Tunnel was constructed between 1904 and 1908 and both the tunnel and the cupolas were designed by the engineer Sir Maurice Fitzmaurice. Made from red brick and Portland stone, each contains a staircase down to the tunnel and four ventilation fans. Their surprisingly ornate iron grilles on the windows spell out the letters ‘LCC’ – for the former London County Council. The cupola on the Rotherhithe side is a little isolated and is fully fenced off with thick red metal bars.

The Wapping cupola is located in the King Edward VII Memorial Park and is more easily viewed as it is not hidden away behind bars. It is signposted as ‘Rotherhithe Tunnel Shaft 3’ – I’m only aware of the two shafts so please get in touch if you know the whereabouts of the other one! You can walk all the way around this cuploa, and enjoy the pretty twin entry doors on the north side (see detail above). Also located on this side is a ceramic and stone memorial erected by the LCC in 1922 to commemorate the sixteenth-century navigators whose voyages into the unknown started from this part of the Docklands. 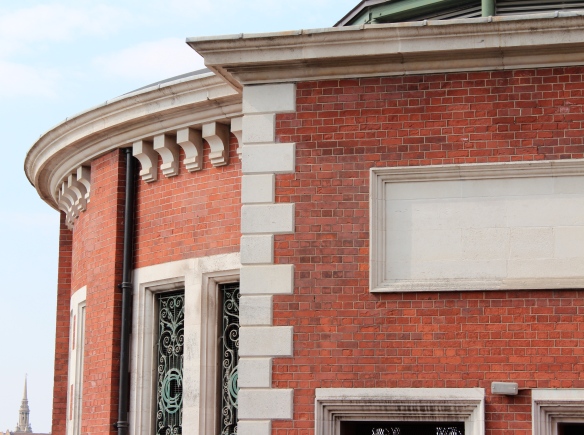