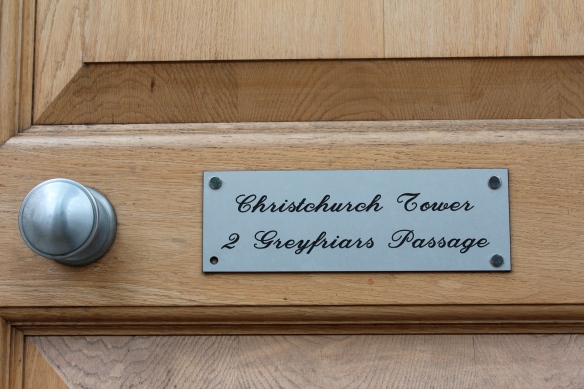 Fancy living in an old church tower? The towers that have been converted into homes must surely be amongst some of London’s most unusual residential options. The City’s churches have taken quite a battering over the years – once numbering over a hundred, 35 were lost in the Great Fire of 1666, while many of those which were painstakingly rebuilt afterwards were again damaged or destroyed during the Blitz. In between these two catastrophic events, yet more were demolished from the late eighteenth century onwards. The towers of a number of these lost churches were saved and put to new uses – while the conversions into commercial premises are more obvious, some have also been turned into rather intriguing private residences. 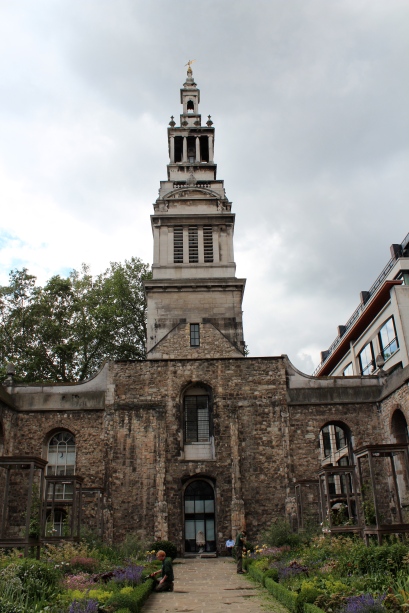 Christchurch Greyfriairs on Newgate Street (above) was damaged in the Great Fire and rebuilt by Wren between 1684 and 1704, only to be destroyed during the Blitz. Luckily the tower survived and was restored in 1960, along with the urns that now grace it which had been removed in the nineteenth century. The area that was once part of the body of the church is now a garden, which has been planted to follow the lines of its original layout, pews and pillars. The rebuilt Vestry House adjoining the tower is now a dental practice, while the tower is indeed somebody’s home (with the rather flashy front door at the top of this post) – you can see their dining area from the garden.

No doubt visitors to Wood Street over the years have pondered exactly why there is a lone church tower standing in splendid isolation in what is now the middle of a traffic island (directly across from the police station, you can’t miss it!). St Alban Wood Street (pictured above and below) was also rebuilt by Wren after the Great Fire – sadly it was destroyed on a single night during the Blitz, 29th of December 1940. Wren’s gothic-style tower survived – a glance through its doors reveals an entry foyer (when the wooden doors aren’t locked) and old stairs leading to the residence above.

I’ve heard that the tower of St Mary Somerset on Upper Thames Street is also somebody’s home, but I’m not so sure. It looks pretty desolate and boarded up to me. Another church that Wren rebuilt after the devastating fire of 1666, St Mary’s was not a victim of the Blitz. Instead it was scheduled to be demolished in the nineteenth century as it was deemed no longer necessary due to low attendance rates. Fortunately someone recognised the beauty of Wren’s wonderfully intricate Baroque pinnacles (seen below) and the tower was saved. The good news is that there appears to be some work being done on it – so maybe there could be some vacancies coming up… 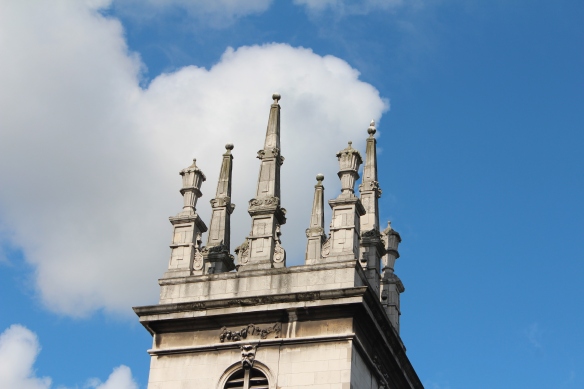 If you’d like to discover more about the City’s lost churches try Gordon Huelin’s book Vanished Churches of the City of London (available at the Guildhall Library for only £5), which lists 69 vanished churches in total. 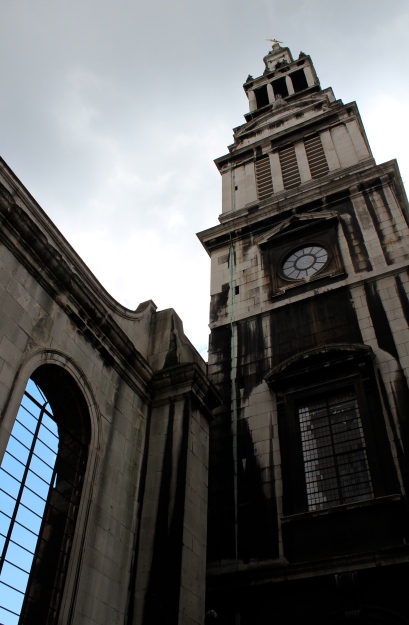