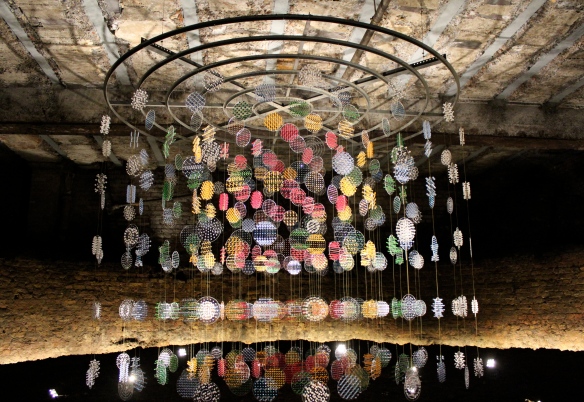 I must admit that a big part of the attraction for me of the art installation currently being hosted by the London Canal Museum was the opportunity to climb down into the underground ice wells and take some pretty photographs. But like many such things, it turned out to be about so much more than that, and I found myself exploring a fascinating interplay between art and science – with a little bit of London history thrown in for good measure…

This installation was created by artist Lyndall Phelps in collaboration with physicist Dr Ben Still, who have been working together since 2012 exploring particle physics. You can read more about their work on their blog. This piece, Covariance, is actually the first instalment of the Institute of Physics’ Superposition series, which brings together artists and physicists to create new works of art.

And yes, you do get to climb down some ladders into the usually fenced-off ice wells that sit beneath the museum building. Built in around 1863, it was originally a warehouse for Carlo Gatti, who as well as being a restaurateur was also an ice importer and ice cream maker. At the time, ice was imported in blocks from Norway, then driven along the canal from what is now Limehouse Basin. The smaller pieces in the first well represent this history, with light boxes that mirror the shape of these ice blocks.

But the main work is in the second well, underneath the front of the building. This dark, circular space is now home to the striking work shown here in these photographs. These colourful disks were inspired by various ways in which data from particle detectors is visualised. I’m no scientist – but fortunately the knowledgable guides can explain more, and show you photographs (also contained in the exhibition guide) of the various inspirations, such as Ben’s own coloured dot diagrams, the women who used to process data from the early detectors, and Japan’s Super-Kamiokande particle detector.

The work is created from everyday materials, including over one kilometre of brass rods (representing the history of science), and beads and diamantes (representing women’s contributions to physics). The space itself also informed the work’s design – and its dark, silent and rather cold environment is well-suited to it. This is one of those works that you really need to see for yourself, but suffice it to say that I could have spent another twenty minutes down there quite happily! 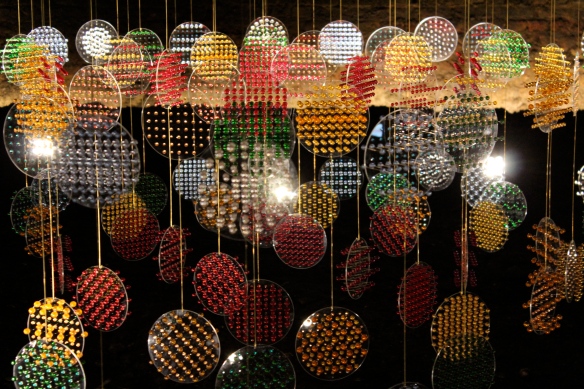 Superposition runs until 20 October at the London Canal Museum (closest tube: King’s Cross). Tours should ideally be booked in advance here, run on Thursday afternoons, Saturdays and Sundays, and cost £4, which covers entry to the museum. There will be a free conversation event with Lyndall Phelps and Ben Still on the evening of Thursday October 17th. 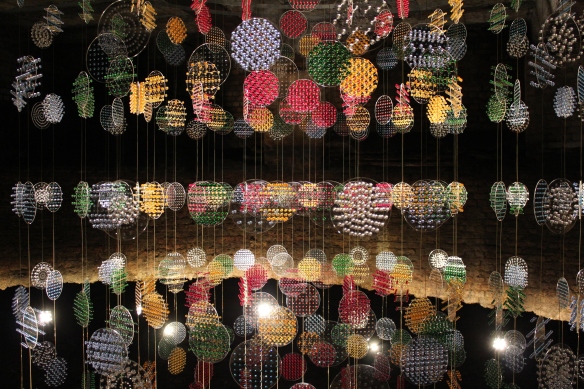